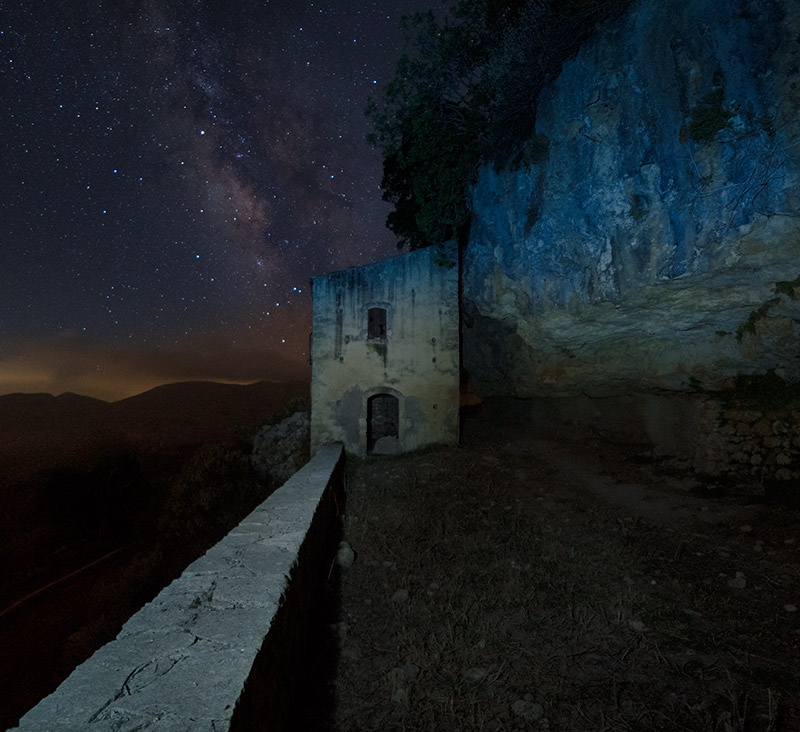 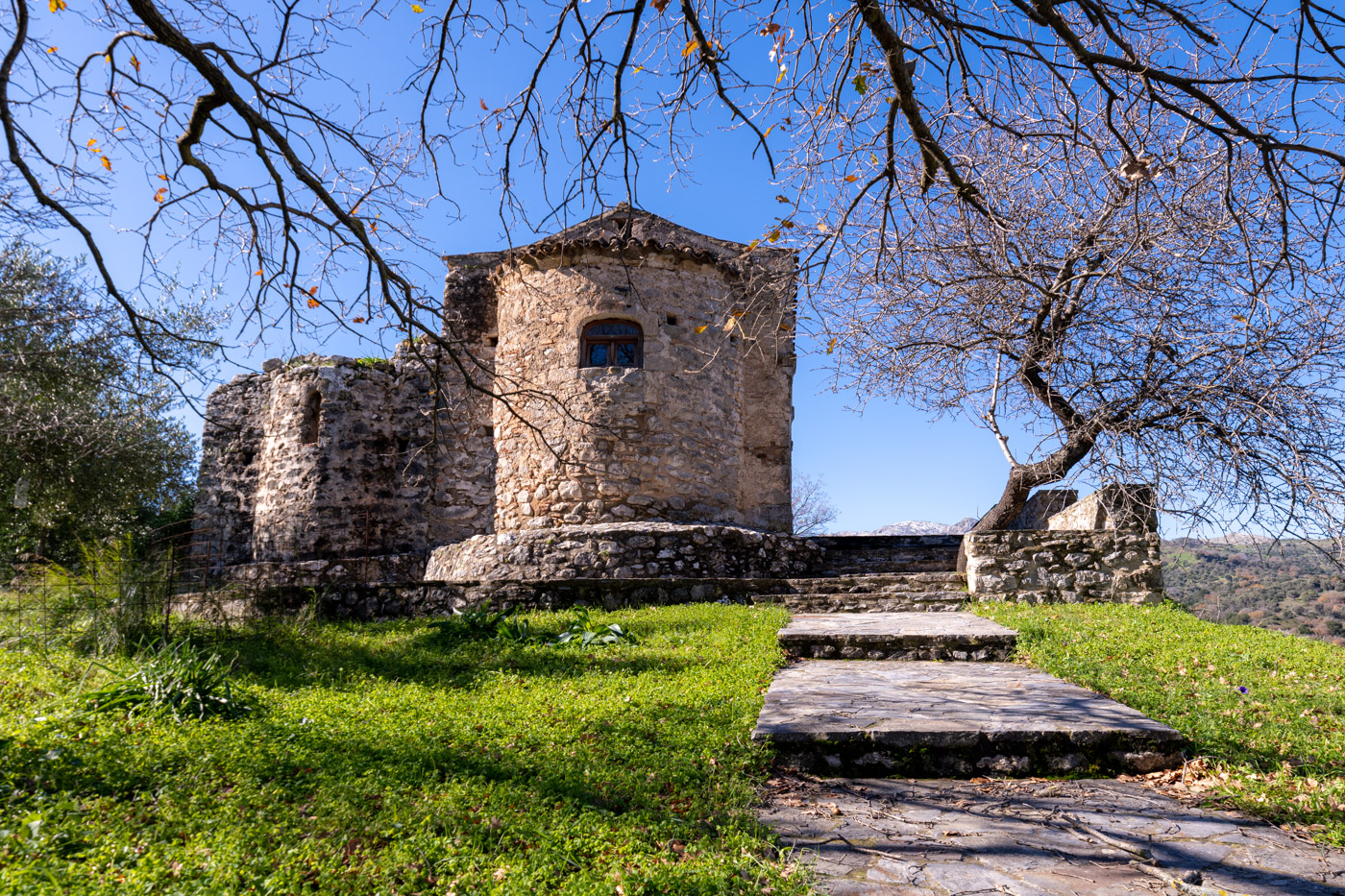 Check the churches locations in the follwing map. You can navigate with the use of GPS of your mobile phone to the selected church. Open the map in a new tab for a fullscreen usage.
Open

The abandoned monastery of Saint Antony at the hilltop of Veni. Veni [Βένι] in the Cretan dialect means upward slope and refers to the location of the monastery. It is a glebe of the monastery of Arkadi despite the relevant distance that separates them. The access to its picturesque location demands a 4×4 car and careful driving since the road is peculiarly narrow. Since 2021 its entrance is limited and its door is locked with a padlock.

The double aisled church of Saint John the Divine and Trinity at Pantanassa. Located in the cemetery at the end of the village, the church has a clear view towards the dam of the rivers in the north. A mention of its founder, Father Manolis Vlastos at 1655, can be found in the basement of the belfry. However, according to the experts, the temple is estimated to be 100 or even 200 years older than the description mentions. Inside the church, the arcosolium is preserved. It’s believed that buried there is either Vlastos [Βλαστός] or Barozzi, because of the letter “B” and Barozzi’s heraldry that have been found there.

Panagia (Dormition of the Mother of God) at Merona is a triple aisled church, that is also dedicated to Saint George and the Saints Peter and Paul. The church was built at the end of the 14th century and there can be found Kallergi’s heraldry emblems and frescos from 1300-1400. Awe arouse the depicted icon of Virgin Hodegetria (Our Lady of the Way) that has been described as “The Mona Lisa of Byzantium”.

Panagia Mavridiani is a double aisled church dedicated to Virgin Mary along with St.Constantine and St.Helen. The church was also once hosted the old cemetery of Merona. The frescoes of the western aisle are noteworthy as they depict Minoan figures in two layers. The archaeologists believe that there used to be a temple dedicated to the old Greek pantheon.

Saint Nicholas at Merona. The church is located inside the alternative camp and dates from the 13th century.

Saint Nicholas and Saint Anna church at Elenes. Based on the frescoes painted by a provincial artist the church is estimated to date from the 14th century. Next to it lies the cemetery temple of Jesus Christ.

Genna [Γέννα, meaning genesis] owes its name to its rich and euphoric area. Around the village lies smaller churches, like St.Onuphrius located in the village’s cemetery and painted in 1329 with expenses of the family of Micheal Varouha. A few meters north-west is the Monumental Olive Tree of Genna, a living monument of the human presence in the area for thousands of years. The most significant proof for this is the location of Sivritos, a city of the Late Minoan Era next to the village Thronos.

The church of the Virgin Mary at Thronos called, Panagia Throniotissa, was built during the 14th century above the remains of a mosaic floor created by the Kallergis family. The heraldry of the family can be seen at the lintel. During the First Byzantium Era, the basement of the diocese of Sivitros was located at Thronos.

Saint George’s cemetery temple of Opsigias with the masterpiece doorway dates from the 14th-15th century.

The temple of Archangel Michael at Monastiraki dates from the 14th century and it is decorated with architrave, capitals, and arches.

Panagia of Patsos (Genesis of The Mother of God). A triple aisle temple that dates from the 11th or 12th century and it was built above the ruins of an older temple which, according to the folklore, used to have 101 doors and 5 domes. It was destroyed by an earthquake in 1304 and was later rebuilt with modern materials.

Koimisi tis Theotokou at Platania (its name means, the Dormition of the Mother of God). The icons of the church date from the 14 century. Noteworthy is the icon of St. George wearing a pearl diadem and an earring on his right ear.

St. Anna’s temple has the oldest icons in Crete according to the dedicatory inscription. Today the temple is derelict but seems to be a double aisle church. It is believed that the other aisle was dedicated to St. Constantine and St. Helen or that the temple is a Roman Catholic one.

Zoodohos Pigi (meaning Life-giving Spring) or Kera Panagia is an astrodome basilica with a transverse narthex. Impressive is the doorway with Kallergi’s House Crest. At the northern wall, frescos of the 13th century were discovered, as well as a baptistery.

Taxiarhon Monastery (meaning Archangels’ Monastery), this temple is decorated with a beautiful winged altarpiece of 1846. At the old Abbey, 4 Archangels’ profiles are visible. It is located at Asomati School.

Agia Paraskevi. The church is located nearby Asomati School and has a unique fresco of its donor and his family above the grave of Georgiou Chortatzis, descend of the renowned Byzantine family of Crete.

Agios Ioannis, at the area Fotis, dated from 12th to 13th century. It used to be a single-aisle temple. Its dome-covered narthex has been later built within the Era of Venetocracy.

Michael Archangel, a cemetery temple at Kardaki, dated from the 13th to 14th century. The icons have been painted by a local artist.

Eisodia tis Theotokou (meaning, the Presentation of Mary), the church of Panagia at Smilé, the icons are dated from the 12th century. Externally an arcosolium remains. It is located in the abandoned village of Smilé.

Agios Theodoros and Agios Vlasios is a triple aisle basilica of the end of the 6th century. It used to have a pronaos and a baptistery, however, it was destroyed by Saracen in 1828 and only ruins remain to date.

The abandoned and desolated monastery of Kaloeidena is next to the village Ano Meros and with a view towards the southern slopes of Psiloritis from the mountain Kentros. At this location lies the renovated Byzantine temple of Sotiros Christou (meaning Jesus the Savior). Its location is of exquisite beauty and rock benches and tables have been placed for the visitors.

Panagia Krioneritissa lies at an altitude of 1000-1100 meters, next to an unmade road after the monastery of Kaloeidenas. A freshwater spring is right next to the church.

Zoodochos Pigi Faneromenis is near the Chordaki at an overgrown slope of the Plati river. The area is flooded by the waters of the nearby spring.

Agios Georgios Xifoforos (meaning St. George the Sword-bearer) is an old monastery dated from 1150-1200. During the Ottoman Empire, the church used to be a secret school. Impressive are the frescos of St. George and St. Dimitrius and the lion, the symbol of the ancient Veneti.

Genesio tis Theotokou at Arkolio or Leivada, with frescos dated from 1400. The dedicatory inscription mentions the name of the devoted Nicholaos Arkoleou. The church used to be an abbey as the ruins of the cells. The grave of Nun Mariam is preserved. 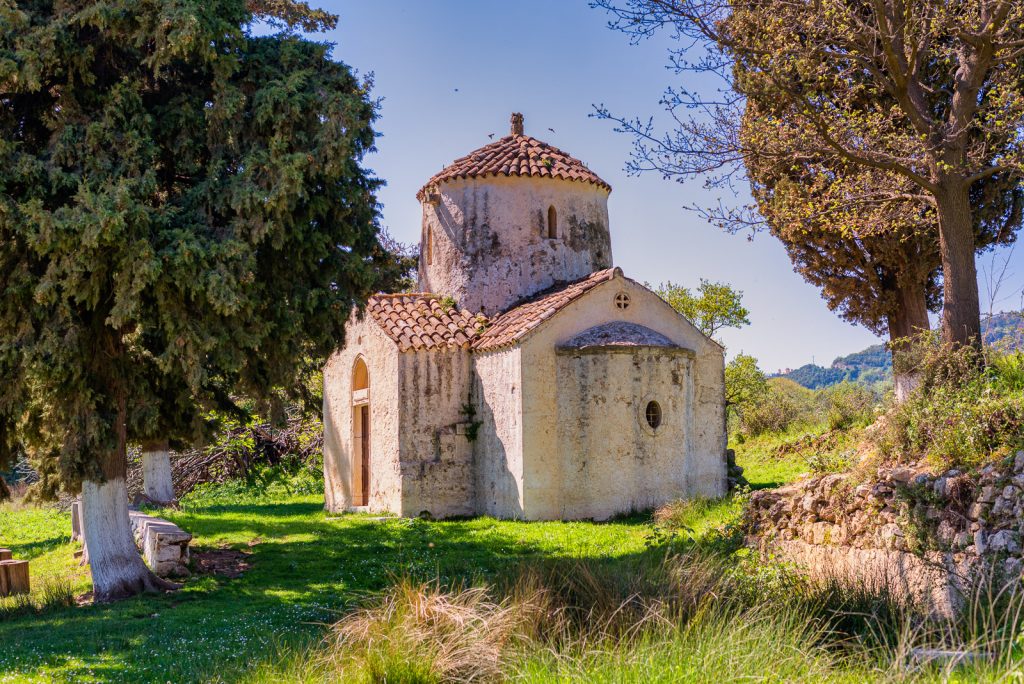 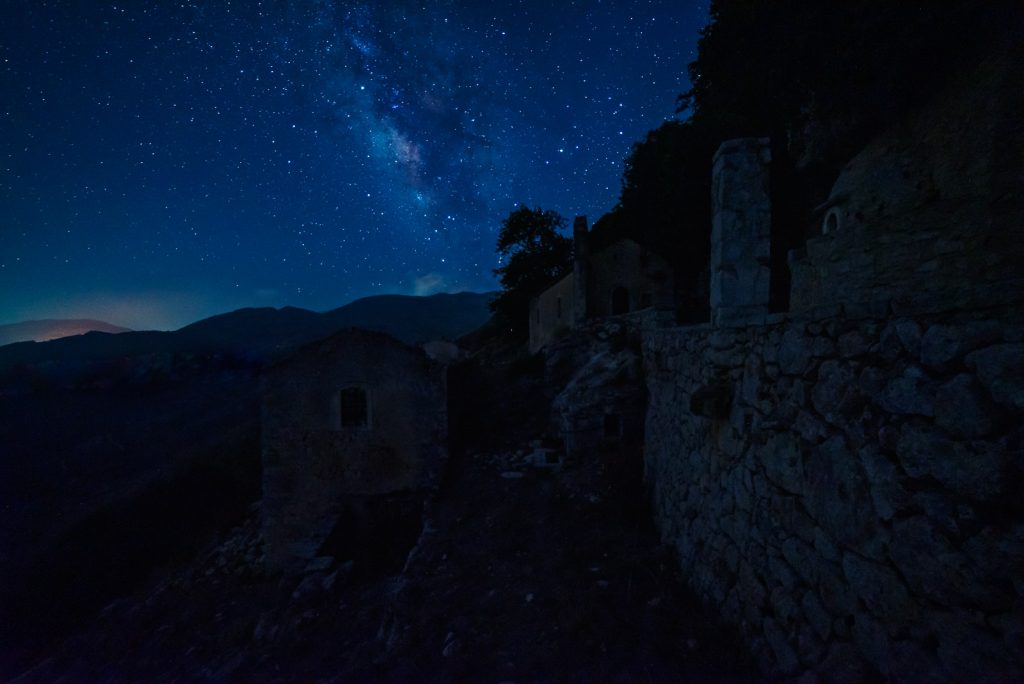 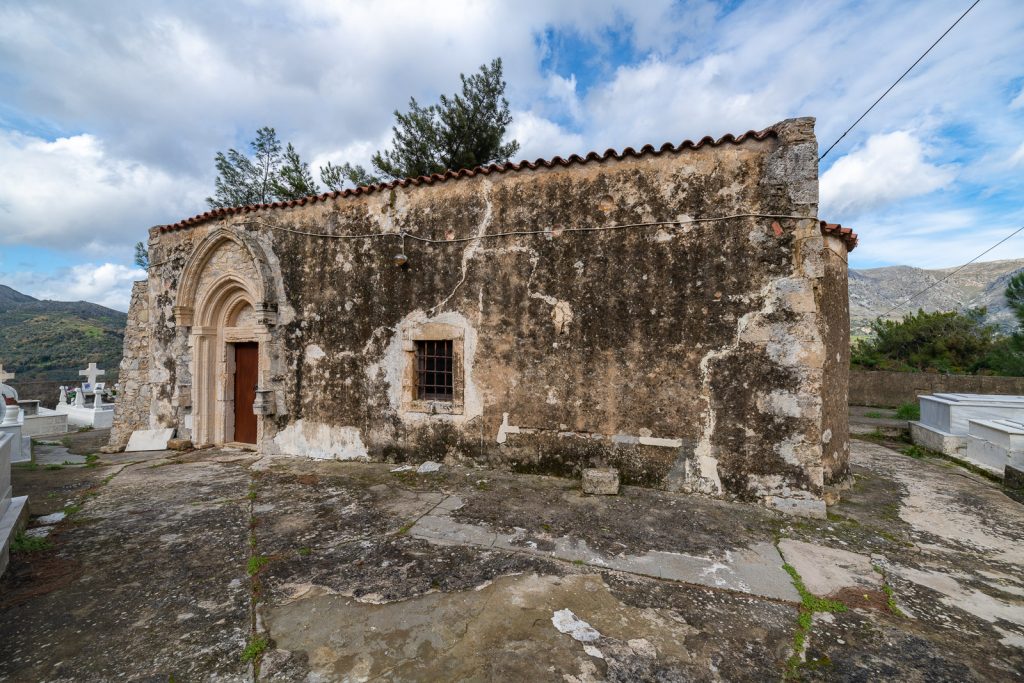 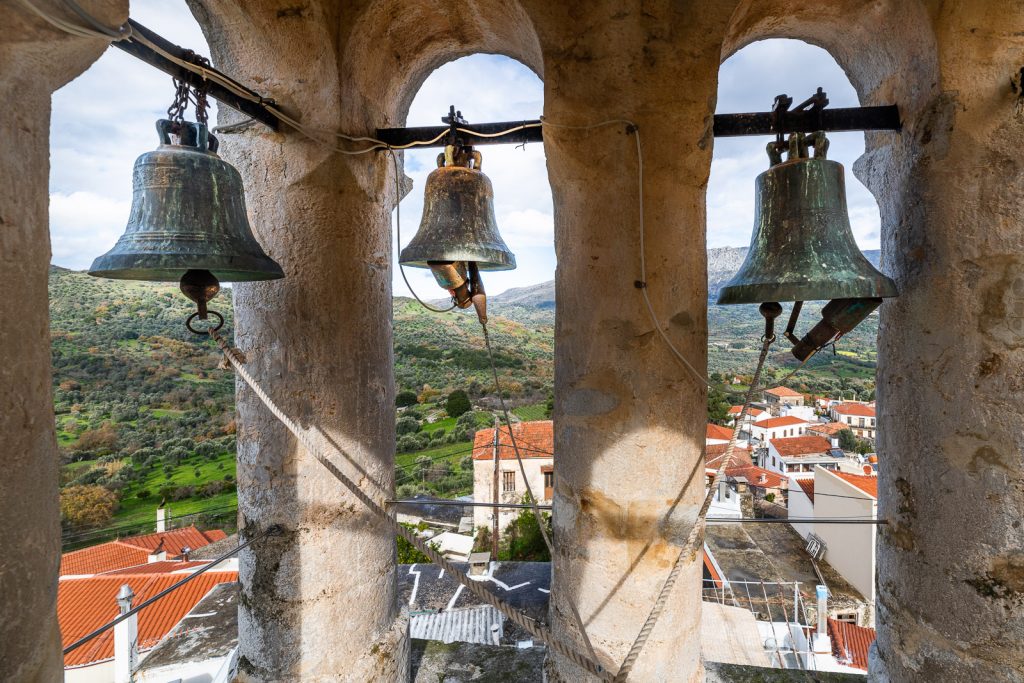 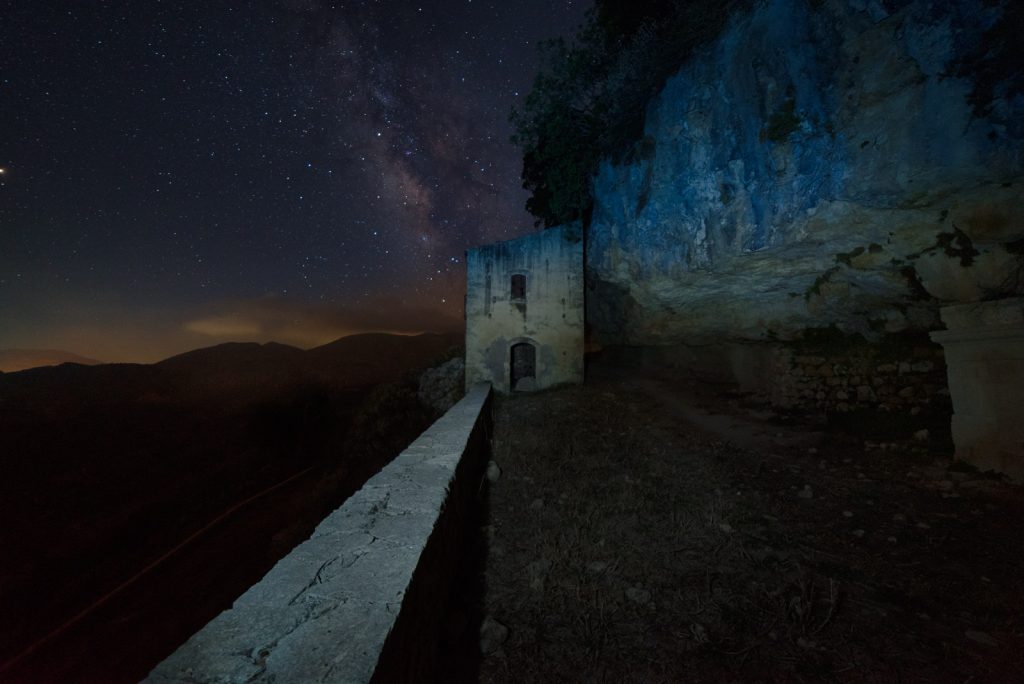 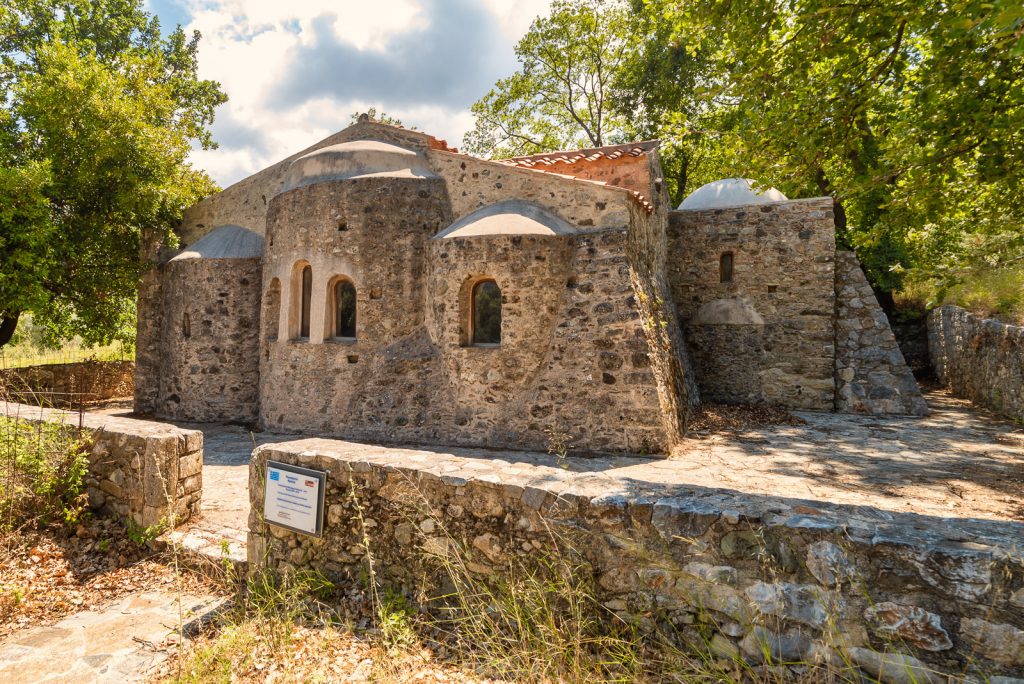 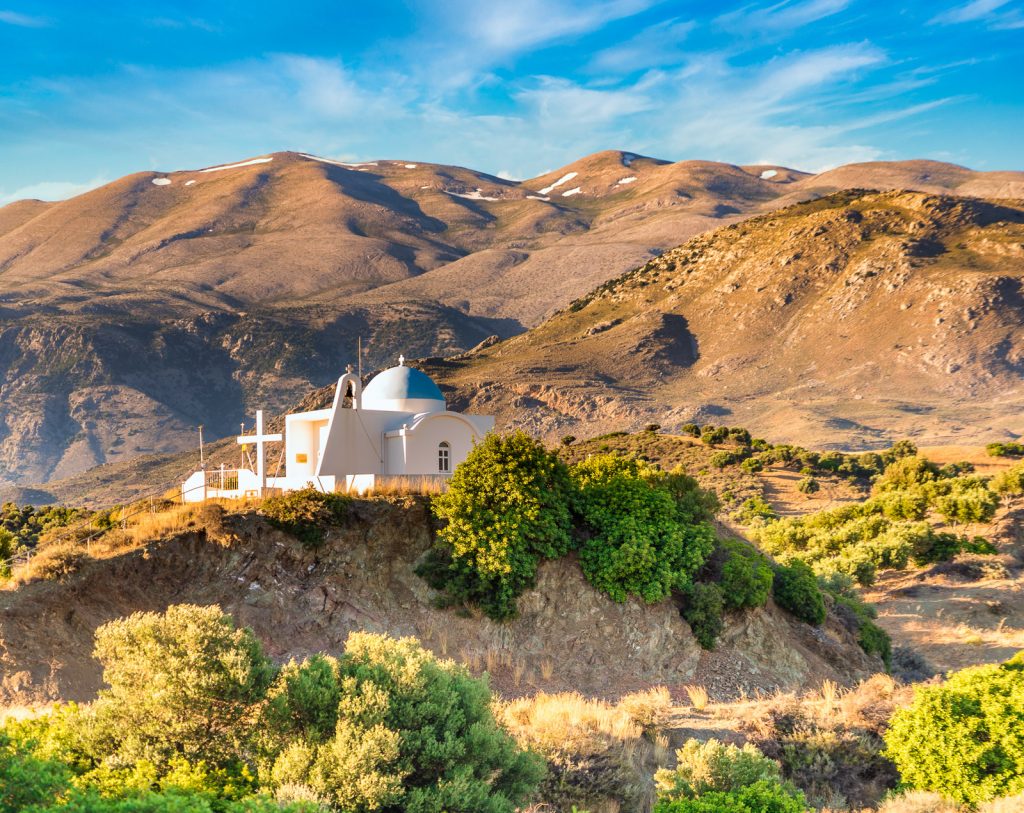 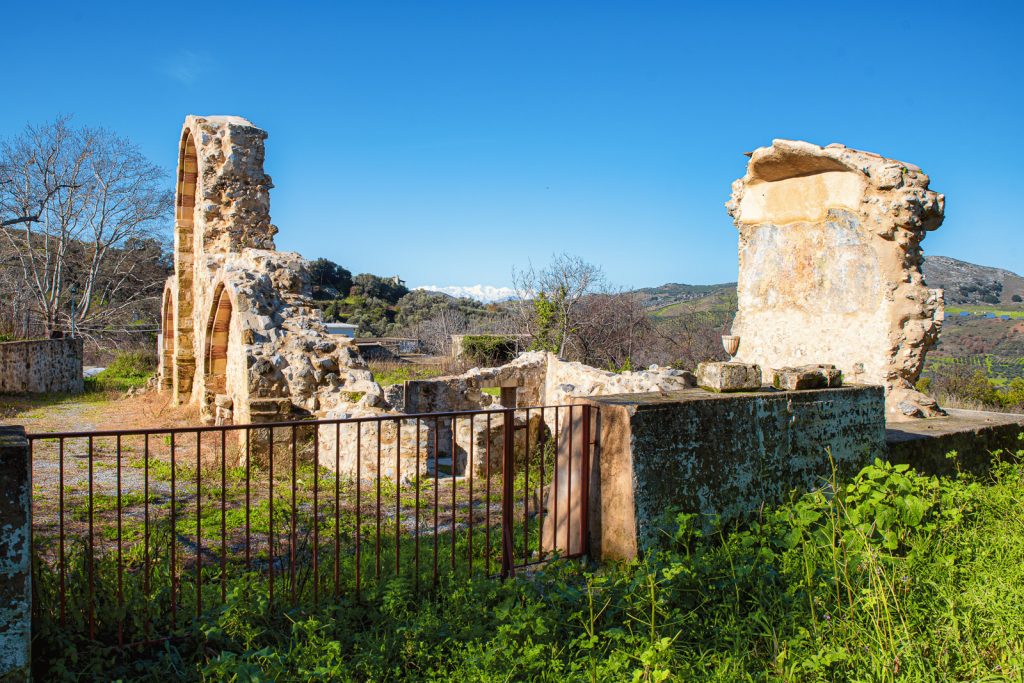 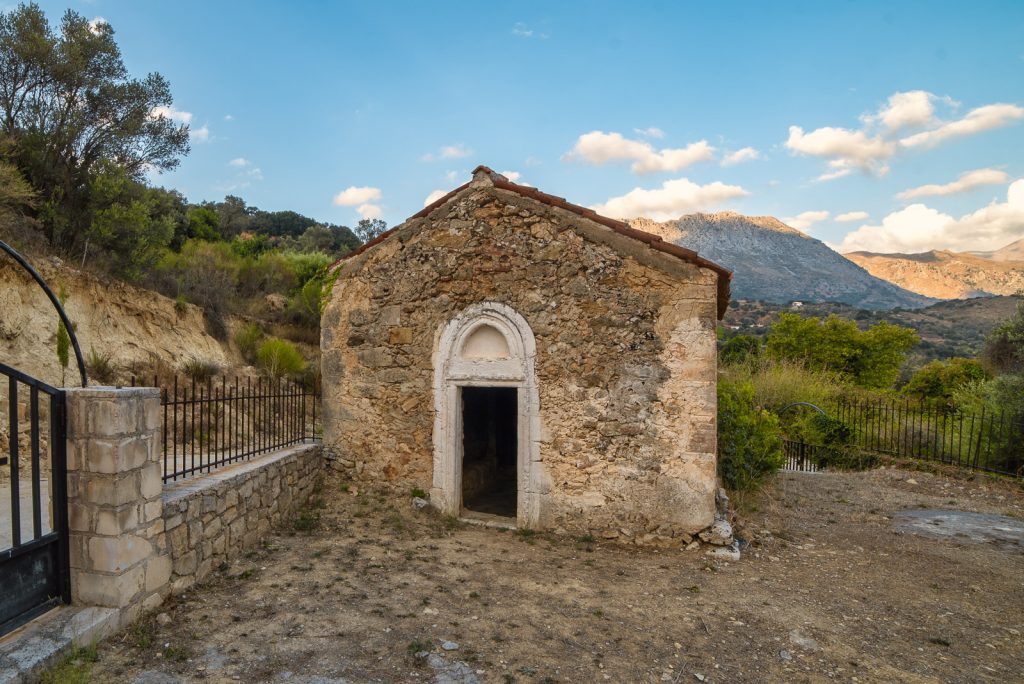 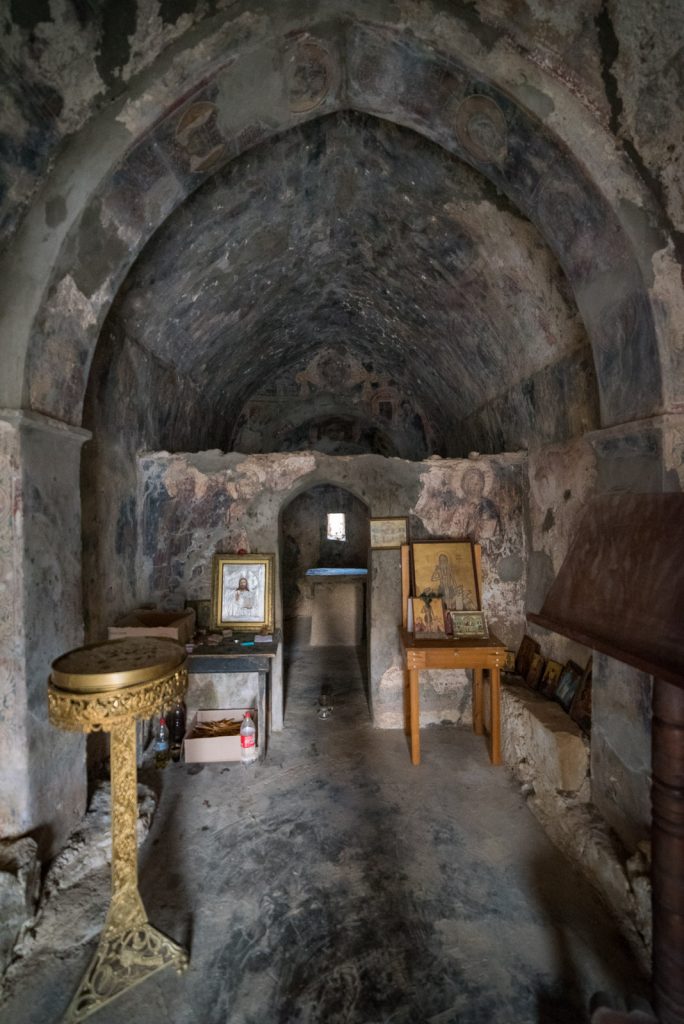 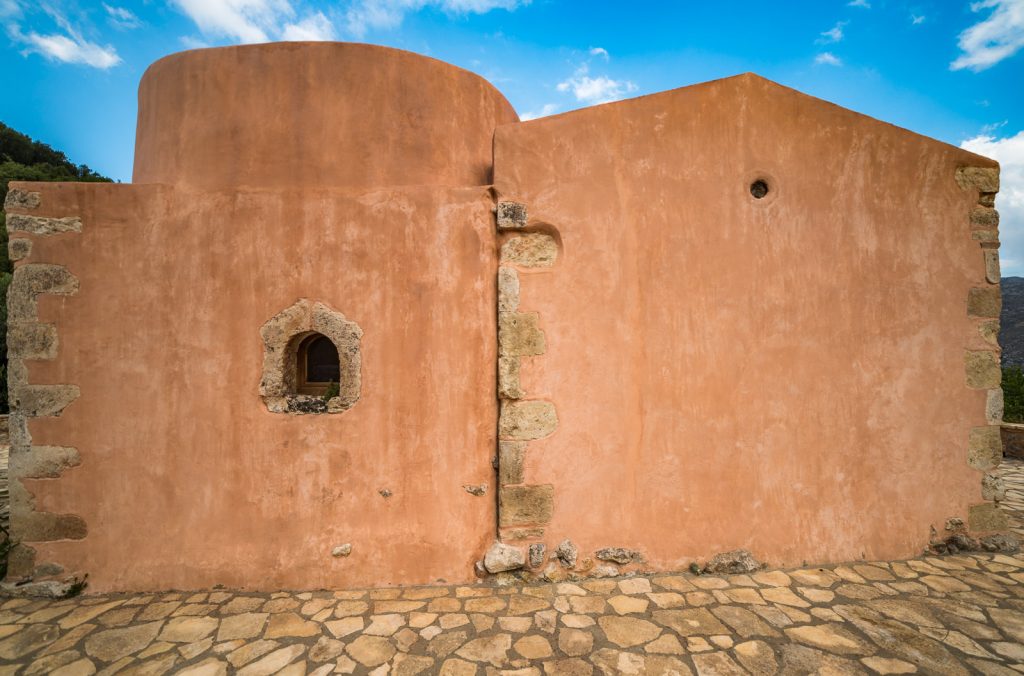 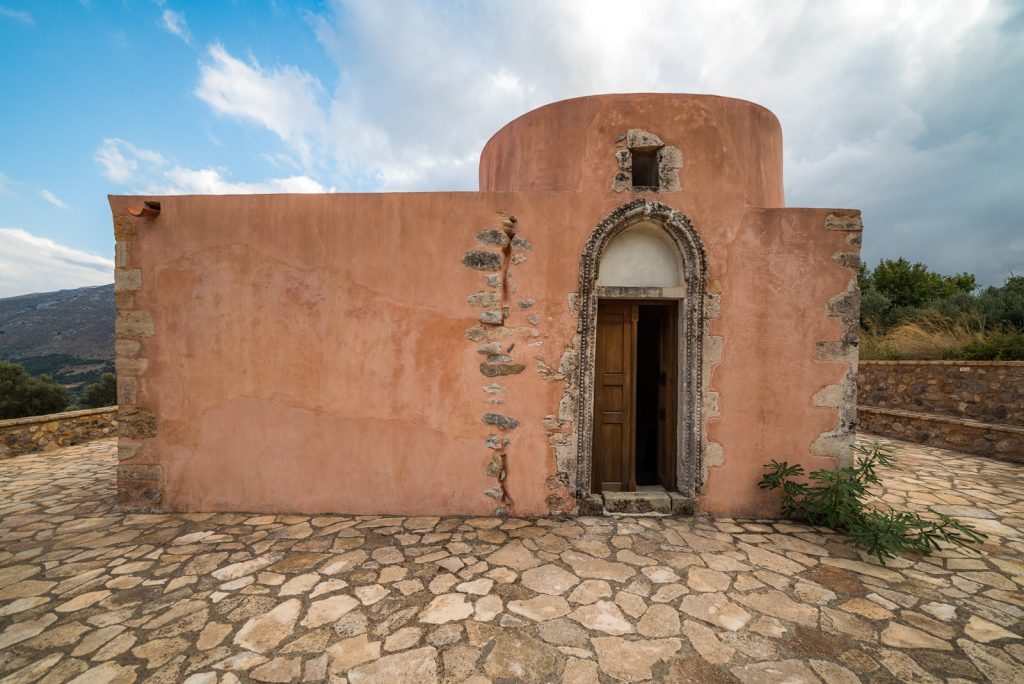 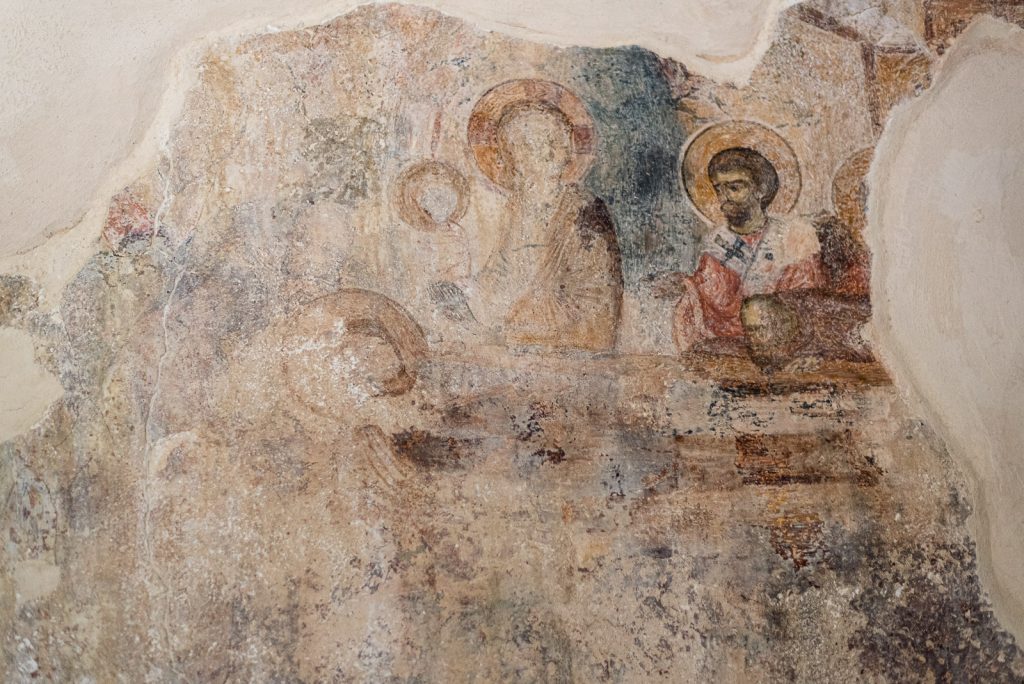 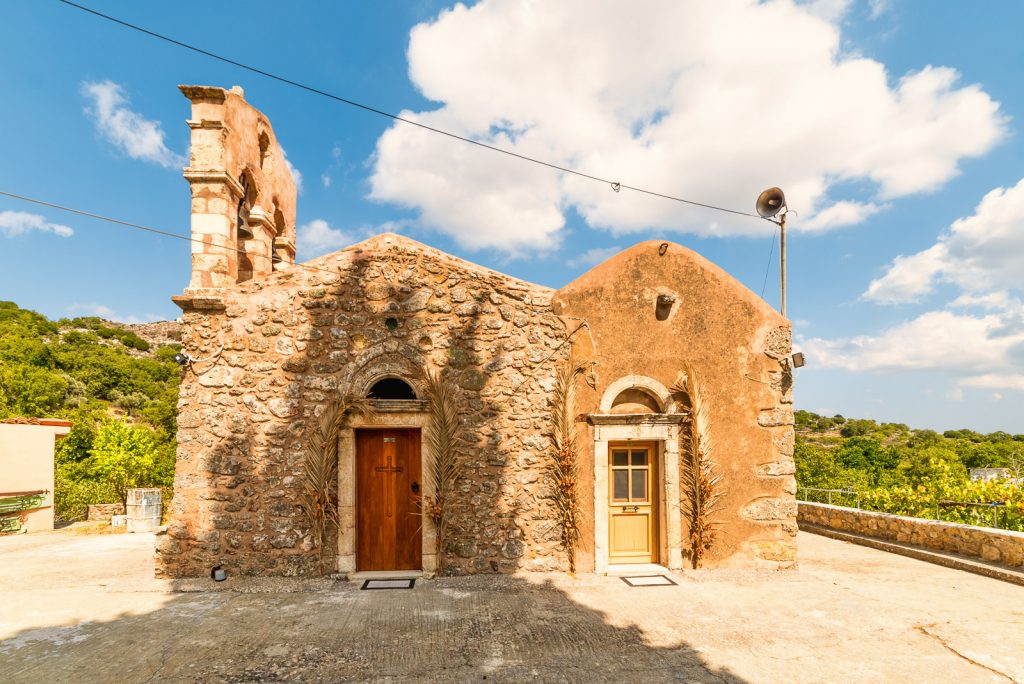 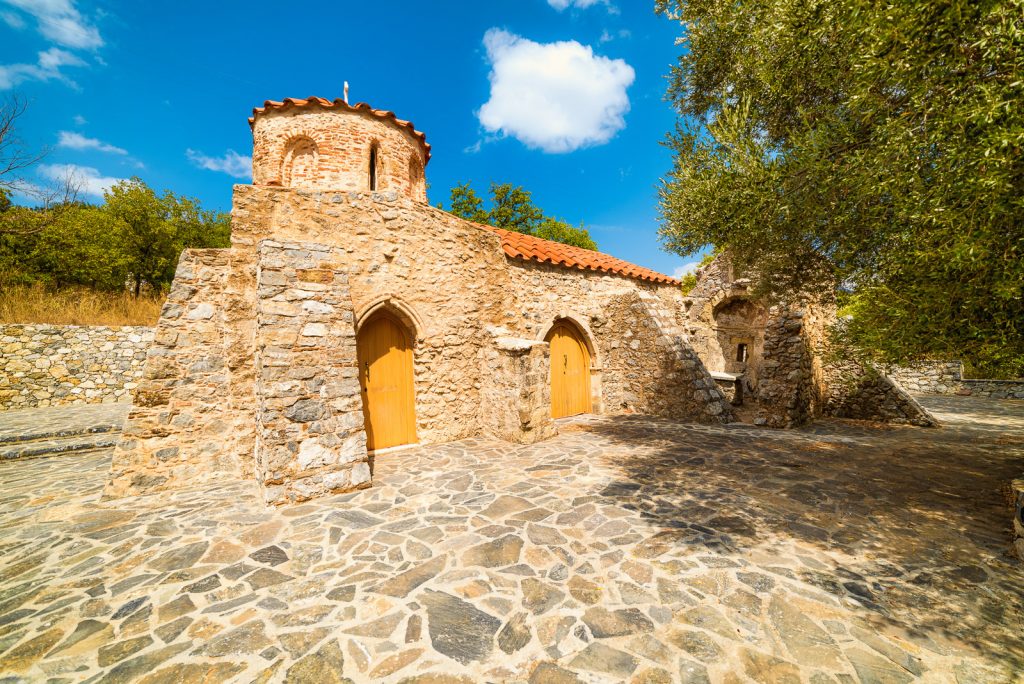 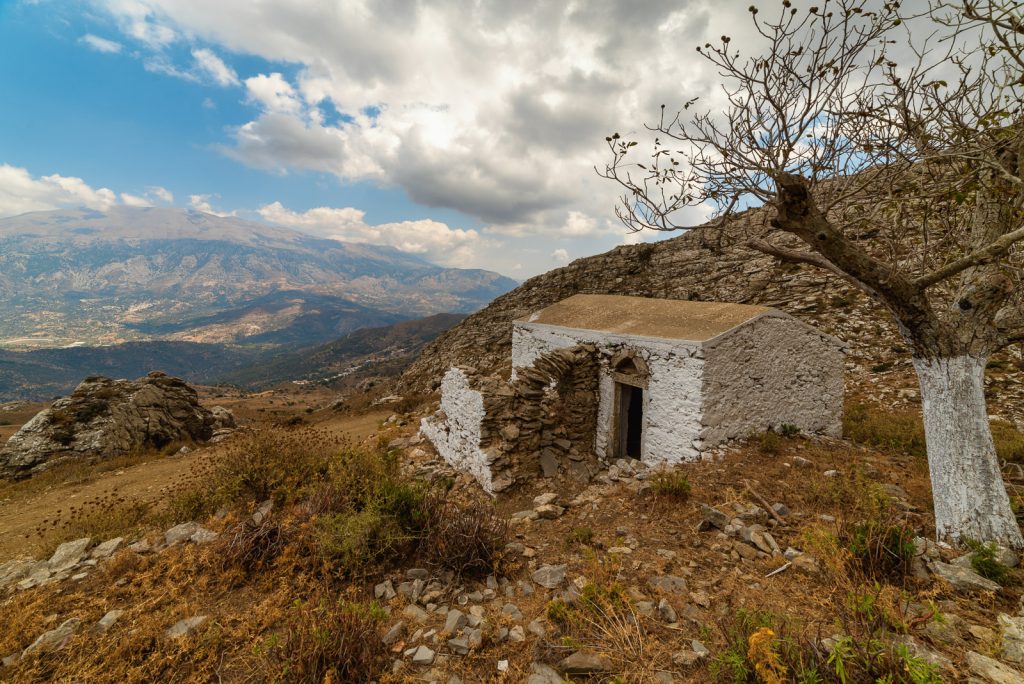 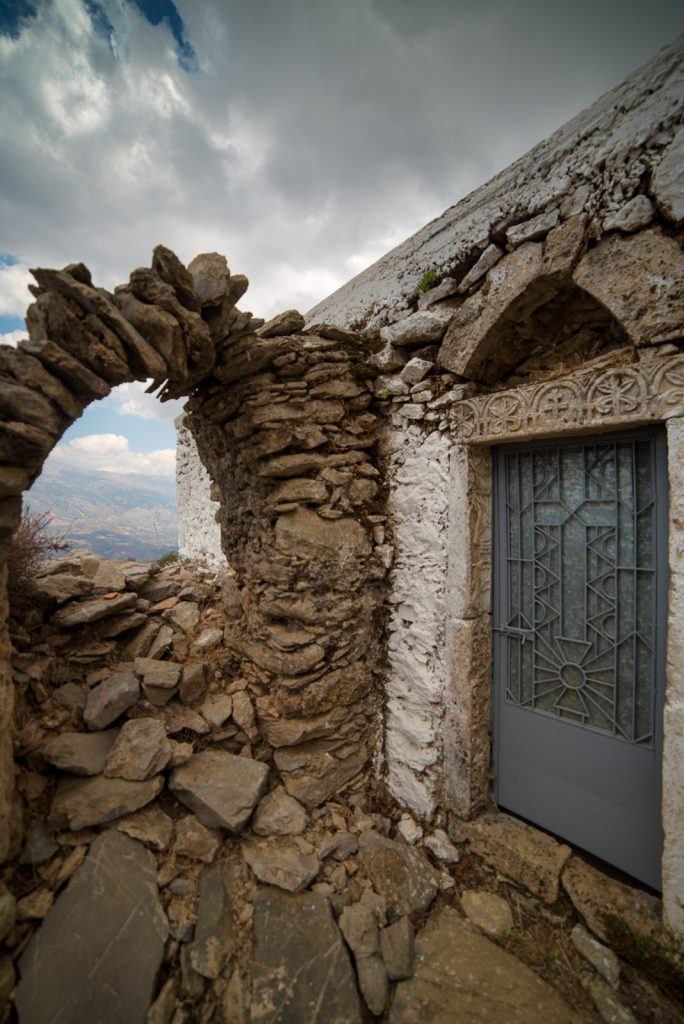 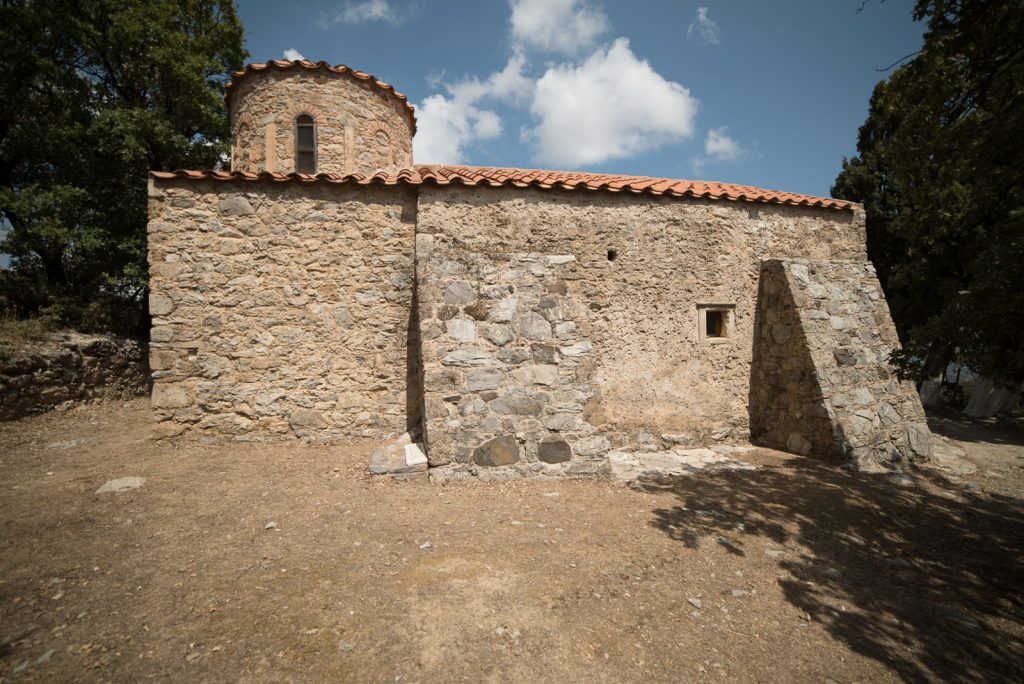 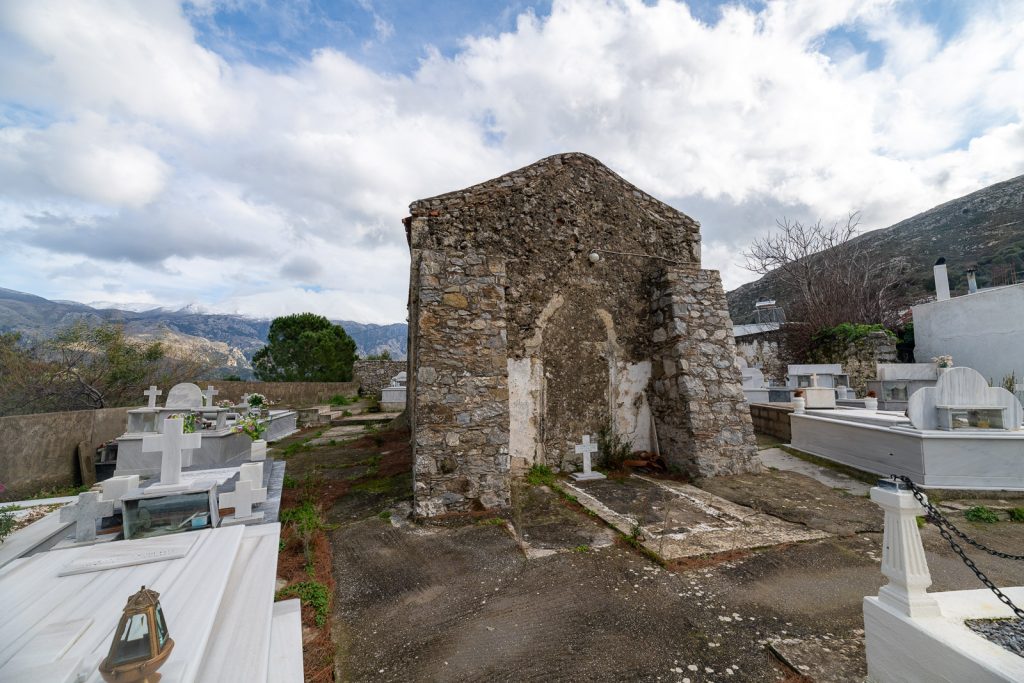 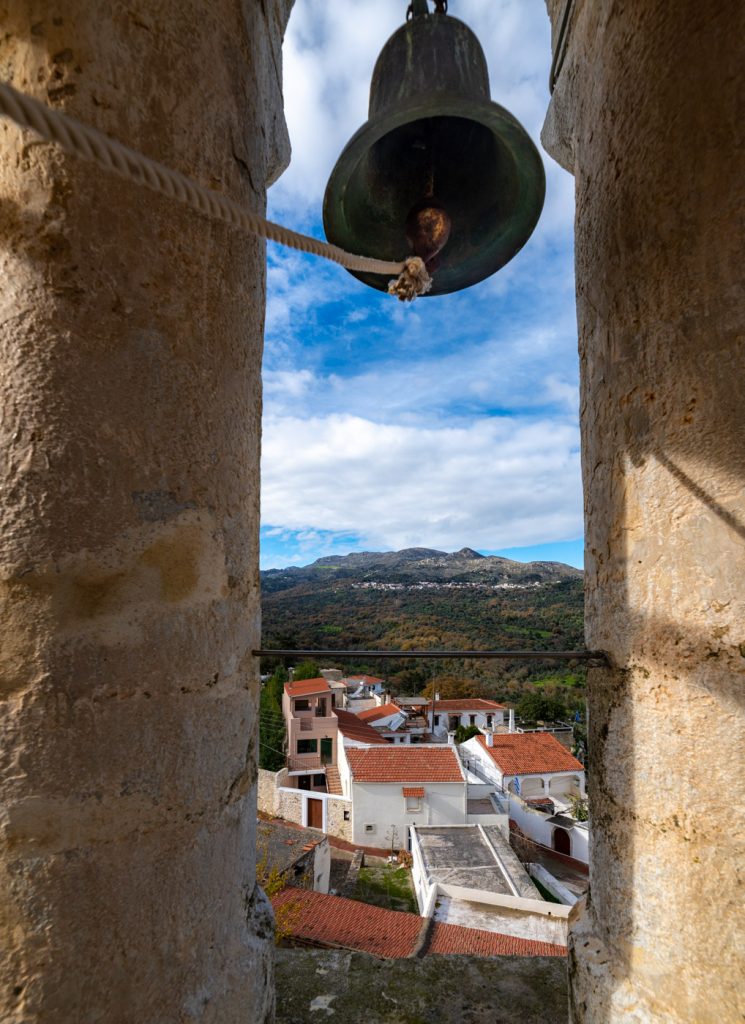 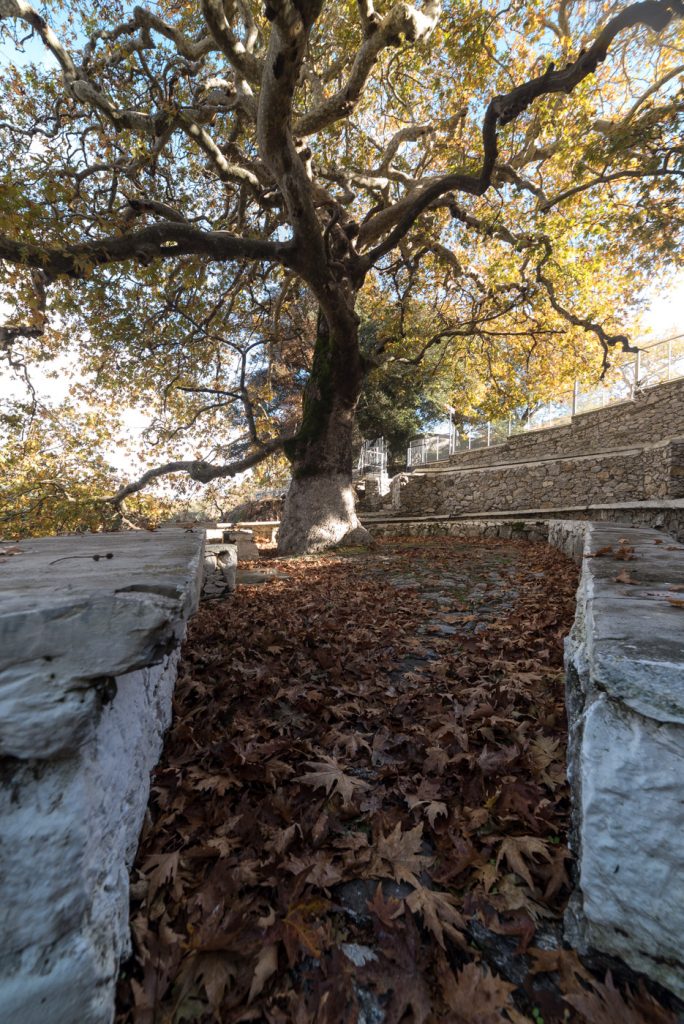 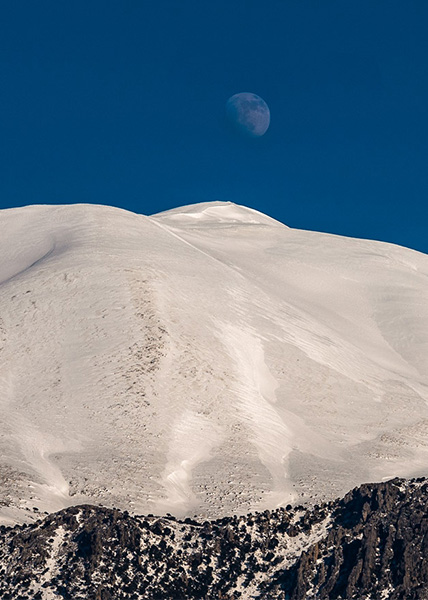 Before visiting Psiloritis geopark make sure to check the interactive map for destinations and services.
Interactive map 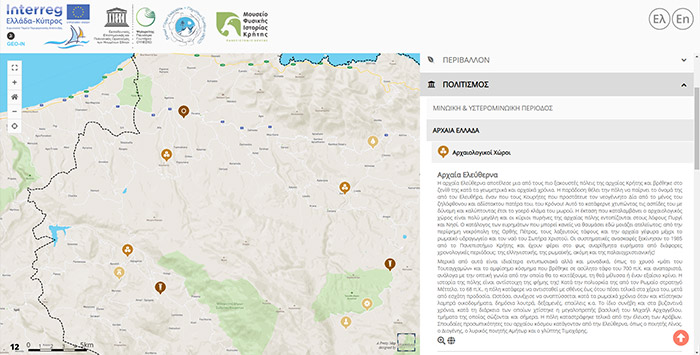 We use cookies on our website to give you the most relevant experience by remembering your preferences and repeat visits. By clicking “Accept All”, you consent to the use of ALL the cookies. However, you may visit "Cookie Settings" to provide a controlled consent.
Cookie SettingsAccept All
Manage consent

This website uses cookies to improve your experience while you navigate through the website. Out of these, the cookies that are categorized as necessary are stored on your browser as they are essential for the working of basic functionalities of the website. We also use third-party cookies that help us analyze and understand how you use this website. These cookies will be stored in your browser only with your consent. You also have the option to opt-out of these cookies. But opting out of some of these cookies may affect your browsing experience.
Functional
Functional cookies help to perform certain functionalities like sharing the content of the website on social media platforms, collect feedbacks, and other third-party features.
Performance
Performance cookies are used to understand and analyze the key performance indexes of the website which helps in delivering a better user experience for the visitors.
Necessary
Necessary cookies are absolutely essential for the website to function properly. These cookies ensure basic functionalities and security features of the website, anonymously.
Analytics
Analytical cookies are used to understand how visitors interact with the website. These cookies help provide information on metrics the number of visitors, bounce rate, traffic source, etc.
SAVE & ACCEPT